What Did You Do In The Lockdown, Daddy?

Normally when I've taken a year between posts all I do is tuck my tail between my legs and make empty promises that it won't happen again. But this year's been a bit special, hasn't it? I hope any and all of you who are kind enough to occasionally waste your time by checking in on my nonsense here have managed to survive the Covid pandemic with your health and your sanity intact. Here's a little catch-up of things I managed to do in between over-eating and binge-watching.

Just over a year ago -- not realizing I was playing chicken with the fast-approaching plague -- I was a guest at the LA Paperback Show. Though I don't think I've mentioned it on the blog before, I've been one of the show's stable of authors for many years now and it's one of my favorite days of the year, as it is for many SoCal book people. 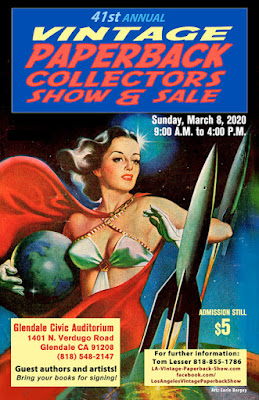 Sadly but wisely, there was no show this year but it's looking good for 2022. A bunch of us author types sit behind a long table ready to scribble in or on anything with which you wish to present us but -- much more importantly -- the hall is absolutely packed with booksellers and dealers offering all sorts of vintage and not-so-vintage books and magazines. It's fantastic. If you're local or visiting next March, you should definitely check it out.

On the book front, I had four releases of various kinds over the course of the year. First -- a mere nine years after the hardcover and three after the paperback -- Rumors of the Marvelous finally got an e-book edition. It's a snip at $3:99 (or three quid in the UK), and if you think that mentioning yet again the stellar reviews and British Fantasy Award nomination it received would be beneath my dignity you'd be very much mistaken. 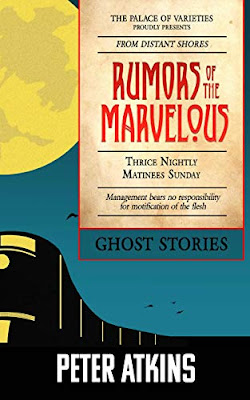 Next comes the dipping of the Atkins toe into the world of audiobooks. My first novel Morningstar, from all the way back in 1992, has had new life breathed into it courtesy of my friend and colleague of more than 45 years, the elderly legendary Doug Bradley. His narration of the novel in Encylopocalypse Publications' audio edition is -- as you might expect from the fella who brought our Dark Pope of Hell to life in the Hellraiser movies -- both chilling and elegant. 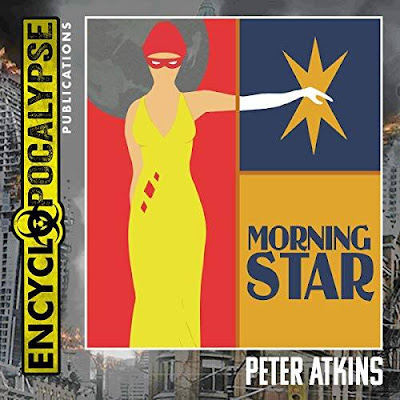 From the same publisher -- and Christ knows what drugs they were on when they had this bright idea -- comes something featuring me not as author, but as narrator. Do you remember the 1980s? Did you like Tom Holland's modern classic Fright Night? Did you maybe also dig the novelization by my old pals (and splatterpunk legends) Skipp & Spector? Do you wanna push your luck? Possibly disproving the theory of Third Time's The Charm, here's Fright Night: The Audiobook. Look at the cute Venn Diagram of '80s horror they came up with to tease it: 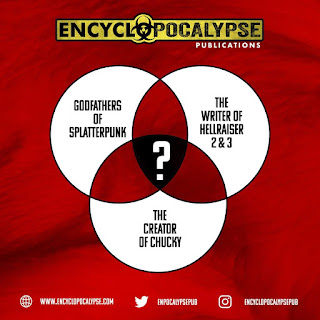 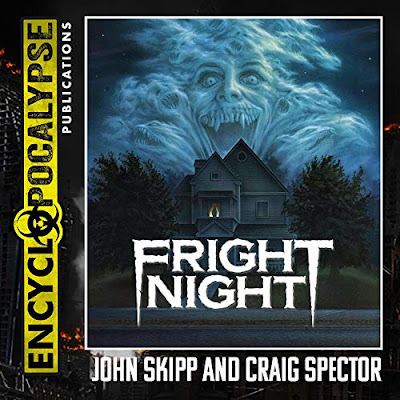 And, speaking of novelizations, Christian Francis took on the unenviable task of transmutating my Wishmaster screenplay into a novel and acquitted himself beautifully. Here's the cover of the hardback and trade paperback editions: 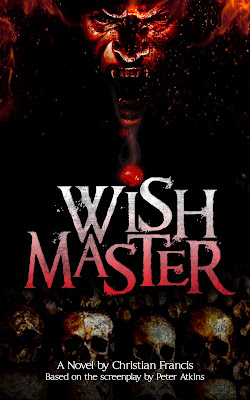 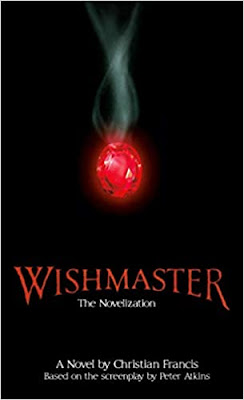 Something else fun was that, in the first couple of months of the lockdown, Glen and I decided to shake the dust off our Algy & Artie fedoras and set up a Rolling Darkness Revue YouTube channel. We figured it would keep us out of mischief and might also provide some free entertainment for the newly housebound. We put up about five or six stories each before stopping in a sulk because nobody was watching. They're all still up there if you'd like to go watch us take a shot of vodka and tell you a spooky story. 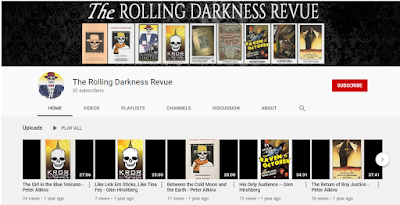 The year was also notable for me becoming a bit of an annoying fixture in the world of YouTube podcasts and Zoom watch-parties, kicking off with a fundraiser for the indie arthouse the Frida Cinema organized by Nostalgic Nebula's Cody Chavez. Cody rounded up Doug B and his fellow Hellbound cenobites Barbie Wilde, Simon Bamford, and Nick Vince along with me, composer Chris Young, and special guest Saturday Night Live's Heidi Gardner to talk our way through the entire movie, which used to be considered extremely rude behavior. Here it is, preserved on YouTube if you want to check it out (there's three minutes and four seconds of just a silent title card before it begins in case you need to visit the lobby for soda and popcorn). 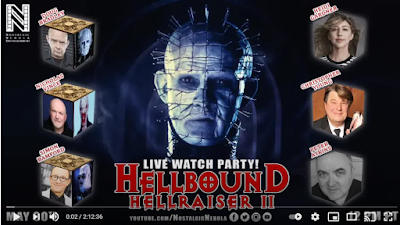 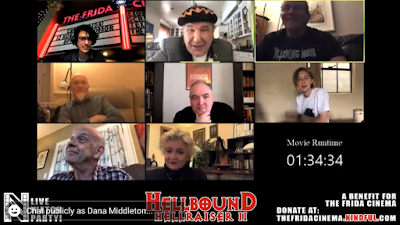 I was also a guest on Humanoids From The Deep Dive and The Hellraiser Podcast, as well as making a return visit to The Clive Barker Podcast, who photoshopped this snazzy flyer for the occasion (please note that, along with Angelique, the Twins, Pinhead, and The Djinn, the fat guy in the hat and suspenders* is also a fictional creation -- that's Algy Black, not me).

*braces, for you Brits. 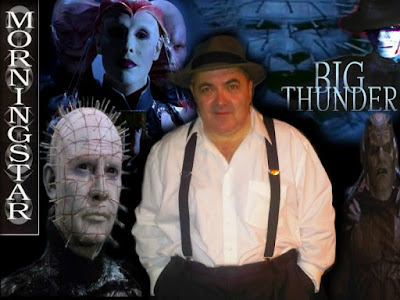 Mill Creek put out a nice box set of the old Lon Chaney Jr Inner Sanctum movies (first time on BluRay), and extras producers C Courtney Joyner and Daniel Griffith were kind enough to ask me to join Court for the commentary track on Strange Confession. We recorded it in lockdown, of course, so I was just on a phone-line as we spoke. And, boy, does it fucking sound like it. If you can get past the Lo-Fi shortcomings, it's a fun conversation, and the set itself is a terrific job -- beautiful transfers, fascinating documentaries -- and well worth checking out regardless of my small involvement. 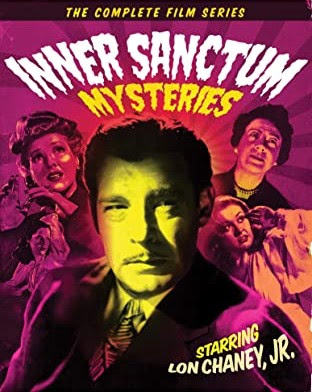 And finally -- and, believe me, I'm almost as sick of myself as you must be by now -- I was interviewed in a couple of very cool magazines. A pretty lengthy one in the new-kid-on-the-block Phantasmagoria ... 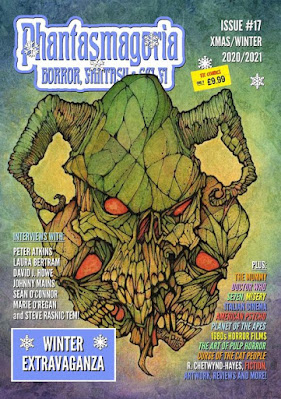 ... and a briefer 'pick five favorite movies and tell us why' piece in the venerable Mad Movies. (This one's in French so don't even pretend you're going to try to read it, you monolinguist savages.) 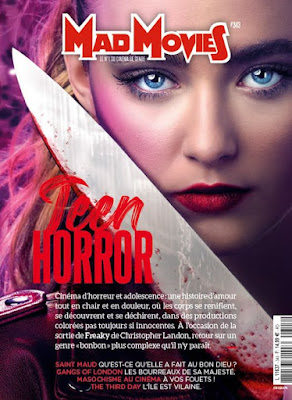 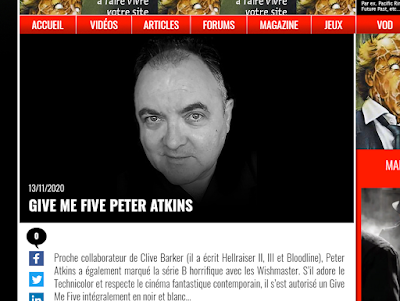 Thanks for your patience. Let's hope that by the time I get my finger out and come back to make another post, we'll all have had some actual interaction with actual people.

As ever, all comments very welcome. 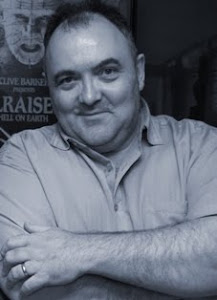 Peter Atkins
Author of the novels Morningstar, Big Thunder and Moontown, and the screenplays Hellraiser II, Hellraiser III, Hellraiser IV, and Wishmaster. His short fiction has appeared in such best-selling anthologies as The Museum of Horrors, Dark Delicacies II, and Hellbound Hearts, and has been selected eight times for one or more of the various 'Year's Best' anthologies. He is a three-time nominee for the British Fantasy Award, most recently for his collection Rumors Of The Marvelous.